Are you looking for the truth regarding Pete’s Betfair Method and is it really a legitimate way to generate consistent income from the betting markets on Betfair? In essence, this is a system that requires an hour or so every day to generate at least an income of 50 pounds per day.

It is created by Peter Butler, one of the top Betfair betting experts who has been relying on this system for a stable income throughout his years of betting on Betfair. How it works is basically by exploiting a betting pattern that Peter discovered himself when it comes to the betting markets, particularly in races. After this discovery, he developed a hypothesis which he then tested to be profitable, before doing it on his live account and seeing consistent profits from it. 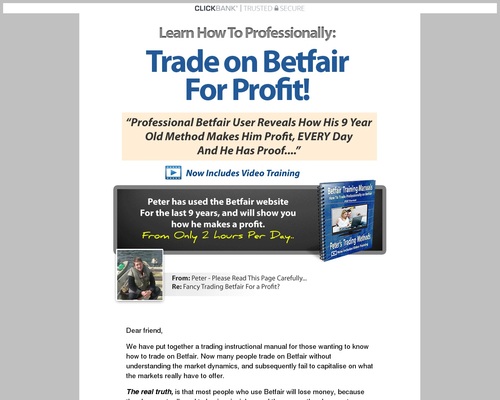 Is The Pete’s Betfair Method Right For You?

This is a system that needs to first be understood well and preferably tested with smaller stakes to become familiarised with it before going for the recommended stakes. We have found this to be very important advice in order to build up confidence to prevent making more costly mistakes in future.

At the end of the day, this system is one that we have seen generate at least £50 tax-free profits per day when done correctly, which would equate to about £18,000+ per year. This is a great source of income given how easy it is to implement and that it can be done from any location around the world with access to Betfair. It is not risk-free however as it does lose occasionally, but always makes up for those losses when the strategy is applied consistently to realise its profitable edge.

What Training Materials Can Be Expected Inside Pete’s Betfair Methods?

Besides the written PDF guide, Peter has also created 20 high-quality, step-by-step videos that show exactly how to implement his strategy every day. While it would be good to some knowledge about Betfair before starting, there is no requirement at all to be an experienced Betfair user to get started as Peter will do all the introduction quickly to get new members started as quickly as possible.

The goal of this system is to generate at least 50 pounds per day with most days taking an hour or so but on occasion, we have even hit those profit goals in just 5 minutes. There is a whole bunch of data analysis and past track records for anyone who is interested in seeing how it works before they invest their own money. Along with that, there are also calculation tools that help members calculate exactly how much they need to stake for each bet depending on their starting capital.

The success of Pete’s Betfair Method has given rise to many frauds who try to sell their own fake methods in its name. This is a big issue as many customers have lost their money in joining from such fake sites. It is advised that customers should be really careful when they are joining and should do some research before they join from any website. To spot these, watch out and avoid sites that claim to write about Pete’s Betfair Method, yet the write-up is completely garbage and unreadable as they are created by software and spammed all over the internet. It is always better to avoid joining from any other site other than the official one. Therefore, it is highly advised that consumers do careful research, or only join from the site from the official website here – http://PetersMethod.co.uk/BetfairOfficial (link opens in a new window). The official website that they have includes the legitimate method.