Would you like to find out the truth about Microcap Millionaires service and whether or not this small-caps stock picking service is really legitimate or just another expensive crappy stock-picking service? Matt Morris’ company is one of various outlets that sell newsletters concerning stocks. Many of these stock-picking companies are, in our opinion, scams, as is bound to happen when an industry floods. As a result, Microcap Millionaires (MM) also has to go through this screening. In this review, we make a detailed review of Matt Morris service and leave it to you to make a decision on its genuineness. 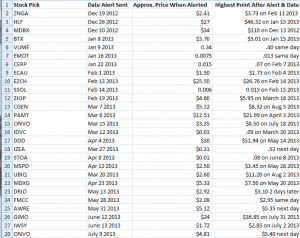 How Exactly Does Microcap Millionaires Work?

Matt Morris is the sole- or key- data collector at the Microcap Millionaires website Matt carries out a research on a particular stock, then decides based on his findings and intuition. He then queues up his subscribers and sends out an alert regarding his stand.

The subscribers then get to make their own decisions, which is mostly in line with Matt’s. Obviously so, because there is a reason why they pay for his alerts anyway. The appreciation of value is usually around 20%, which is enough value for making gains with penny stocks. Since the moving of stocks is dependent on the number of traders taking positions, the large number of Microcap Millionaires subscribers makes a significant move in prices.

All in all, Matt is following the trend of stock prices. He decides when it is right to exit the current position, and sends out those same alert to his subscribers. The subscribers exit, causing prices to fall back to their original price or close by. That would mark a gain for Matt’s subscribers.

Since its inception in 2008, the Microcap Millionaires service has grown steadily every year, and currently boasts thousands of subscribers. The success rate has been a key reason contributing to this growth, with referrals coming aplenty. Microcap Millionaires is one of the more popular email alert companies in the stock market. There really is no outlet that gives a hard rating of alert companies, but its popularity among stock traders means it is among the top cream in the industry.

How Can You Start Profiting From Microcap Millionaires?

To start using this indicator, you will have to attach Microcap Millionaires to the chart that you wish to trade. When the signal is generated, you will have to enter your trade on your broker’s platform, along with your stop-loss, take-profit and smart-exit levels. There is no discretionary thinking required to make this work, and you certainly should not do or you will start trading and losing on emotions. These are the exact same indicators and system that professional trader Karl and his traders use to make . consistent money every month.

Is Microcap Millionaires Right For You?

Before passing a verdict on a tipster, you will have to differentiate between two things: Is it not genuine or is it not right for you.

For starters, Microcap Milloinaires is a penny stocks tipster and thus appropriate for people trading small stocks. As mentioned earlier, the stocks move within the range of 20% at a time. Well, 1000 percent rises and falls in value have been recorded, but those are usually rare occurrences. For big stock traders, this might not be the best stock tipster for you as larger-cap stocks are not covered by Matt.

Review Verdict:Microcap Millionaires is a legitimate service that works

The success of Microcap Millionaires has given rise to many frauds who try to sell their own fake websites in its name. This is a big issue as many customers have lost their money in buying from such fake sites. It is advised that customers should be really careful when they are purchasing and should do some research before they buy from any website. To spot these, watch out and avoid sites that claim to write about Microcap Millionaires, yet the write-up is completely garbage as they are created by software and spammed all over the internet. It is always better to avoid buying from any other site other than the official one. Therefore, it is highly advised that consumers do careful research, or only buy from the site from the official website here – http://MicrocapMillionaires.com/Official  (link opens in a new window). The official website that they have includes the legitimate website.

Matt clearly outlines in the disclaimer that the tips he gives out in Microcap Millionaires, albeit successful, are not scientifically tested or proven. He also warns current and would-be subscribers that past success in calling market trends correctly is not a guarantee for the future. Such confidence can only be exhibited by somebody who has risen to a certain level of confidence in his trade, and Matt from Microcap Millionaires definitely has the results and experience to do so. If following a real and profitable small-cap trader and growing a small account fast is something you are looking to do right now, we highly recommend you to learn more about Microcap Millionaires at the button link below!