Do you wish to find out more about the List Eruption V2 plugin and is this really one of the very best plugin for list-building using viral traffic today? After more than 2+ years of requests from over 2,500+ of his existing members, Mark Thompson, the owner of this plugin, has finally released a feature-rich and flexible plugin for generating viral traffic and list-building with it. This plugin has been on the market for several years now and has truly revolutionised listing building for marketers by helping users create viral traffic campaigns easily and quickly.

Built to work on WordPress as a powerful list-building plugin, List Eruption V2 allows users to easily generate friend referrals and incentives. This is done through its unique social-sharing technology that has been shown to be effective at allowing users to grow their lists at 10 to 20 times faster than most other methods. 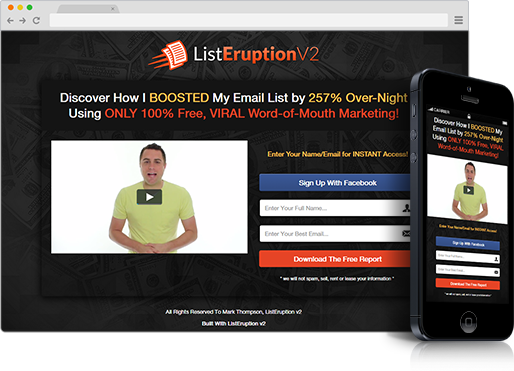 It works through a process now known as Gamification, whereby users are rewarded for engaging with your offer, brand or content. Some of the things you can let your subscribers earn are premium training videos, premium content, promo/coupon codes, and anything else you can think of that your subscribers might value. List Eruption V2 can be used to reward subscribers for interacting with your social media profiles, paid/free offers, content like your videos or blogs etc.

Does List Eruption V2 Really Work And Is it Worth Joining?

From what we have found, the developers of this plugin paid more than $20,000+ in order to build this plugin up from scratch, as there was nothing that came close to doing what it did when it first launched back in 2010. Both its founders are highly experienced internet marketers who already knew what worked and what didn’t, hence knew exactly what they wanted in this plugin to make it work effectively for list-building. This plugin actually works better and better as your list gets bigger by making it grow faster through the power of incentives and friends referrals.

By having access to List Eruption V2, users gain access to multiple features including its referral system, subscriber-tracking system and email reminder system all from one platform. Since using this plugin, our list size has grown by more than 3 times when compared to list-building without this tool. It turns all of our subscribers into a list building army by reminding subscribers to participate in order to reach their next levels of rewards.

The success of List Eruption V2 has given rise to many frauds who try to sell their own fake plugin in its name. This is a big issue as many customers have lost their money in buying from such fake sites. It is advised that customers should be really careful when they are purchasing and should do some research before they buy from any website. To spot these, watch out and avoid sites that claim to write about List Eruption V2, yet the write-up is completely garbage as they are created by software and spammed all over the internet. It is always better to avoid buying from any other site other than the official one. Therefore, it is highly advised that consumers do careful research, or only buy from the site from the official website here – http://ListEruption.com/V2Official (link opens in a new window). The official website that they have includes the legitimate plugin.

In summary, List Eruption V2 is a truly unique and powerful plugin for anyone serious about exploding their list-building efforts through the power of every subscribers’ social networks. On average, users have reported growing their lists at 257% faster than their average list-building efforts by tapping into the previously untapped powerful of all subscribers’ networks. Hence, if you too would like to start using a revolutionary plugin that instantly creates viral Facebook list-building campaigns to explode your list-building, then we highly recommend you to learn more about List Eruption V2 at the button link below!