Are you interested in learning more about the Meditation Mastery Secrets program, and can it really show you how to correctly develop the habit of meditation and reap all the benefits from them? Created by the self-growth and meditation expert Jason Stephenson, this is a home-study course that shows students how to find shortcuts and finally create the lives of their dreams.  It does not require any prior skills or experience to do and has been shown to be able to successfully transform the lives of students from all around the world.

Through activation of the right brain signals, Meditation Mastery Secrets gives the person more wealth, confidence, abundance, and even find true love in their lives. It has also been found to create inner stillness and deep relaxation in people, which then brings about positive personal changes and eliminates stress in the body.

What Is The Story Behind How Meditation Mastery Secrets Was Created And Does It Really Work?

Through this program, its founder Jason Stephenson shares his amazing life story and how he managed to develop this powerful meditation course. Jason was a talented who had visited many countries including Taiwan, Malaysia and Australia to join singing competitions, and he consistently comes out near the top every tie. Yet, he gave up his dreams of becoming a singer because his boss as his boss and the people around him refused to acknowledge his talents and efforts. He also signed up for unemployment grants after becoming unemployed and began living a wayward life.

During this phase in life, he starting sleeping around with strangers and engaged in activities like alcoholism and drug abuse, all in the hopes of trying to curb his depression. After finally getting his body into a really terrible state, he then realised that this was not the life he wanted and had always dreamed of. Even bad news broke out later when he found out he was HIV positive from his doctor after he had visited the hospital to diagnose his poor health symptoms.

To rescue himself from his dire situation, he began giving himself hope and changed the HIV acronym of “Human Immunodeficiency Syndrome” to “Here In Vitality”. This form of visualisation changed his perception of HIV, and after making deeper research into meditation and finding out what works and what doesn’t, he finally created the Meditation Mastery Secrets program. Subsequently, he has also made more developments on his invention for 12 years after he started benefiting from meditation.

What Is The Key Benefits Reported By Students Of Meditation Mastery Secrets? 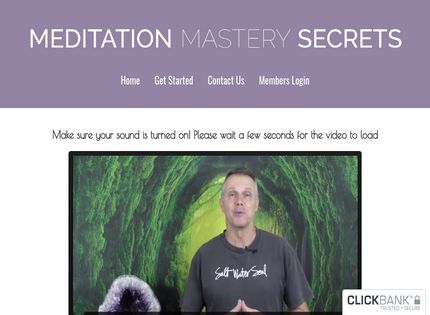 The success of Meditation Mastery Secrets has given rise to many frauds who try to sell their own fake programs in its name. This is a big issue as many customers have lost their money in joining from such fake sites. It is advised that customers should be really careful when they are joining and should do some research before they join from any website. To spot these, watch out and avoid sites that claim to write about Meditation Mastery Secrets, yet the write-up is completely garbage and unreadable, as they are created by software and spammed all over the internet. It is always better to avoid buying from any other site other than the official one. Therefore, it is highly advised that consumers do careful research, or only join from the site from the official website here – http://MeditationMasterySecrets.com/Official (link opens in a new window). The official website that they have includes the legitimate program.