Are you currently thinking about trying out the Nootopia CollaGenius blend and is it true that it is capable of transforming the lives of those who take it by allowing them access to the most powerful ingredients that the world’s elite have kept a secret that is finally starting to escape into the world? Due to the processes of ageing and other lifestyle related factors, the body starts to lose its ability to produce collagen at its most optimal levels. As such, many people start experiencing symptoms of worn-out cartilage, skin health problems, reduced nerve function and low physical performance, just to name a few. As such, a natural collagen-boosting supplement such as Nootopia CollaGenius has been formulated to reverse these symptoms and has so far receive rave reviews from its users.

With its high concentration of vital nutrients and collagen peptides, this supplement is known to offer many health benefit including increasing cognitive function. Furthermore, it is also able to boost mental endurance and the immune system through organic ingredients such as Lion Mane mushroom extract, which is known for increasing BDNF (Brain Derived Neurotropic Factor) levels. 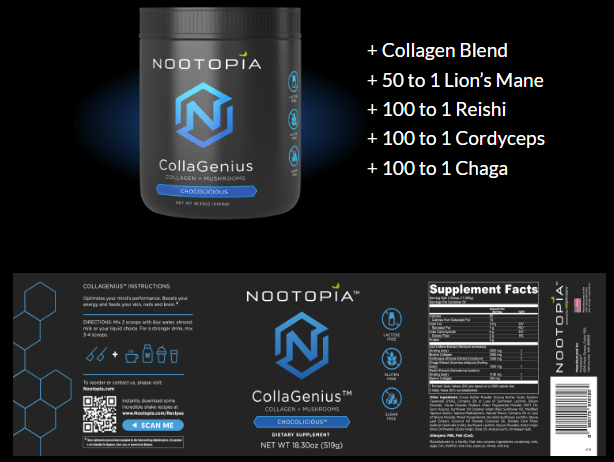 What Are The Main Nootopia CollaGenius Ingredients And How Do They Work?

Current scientific research has shown that this is one of the most powerful ingredients for supporting brain health and has been linked to many brain health benefits such as memory retention and thinking ability. It is also shown to be able to improve cell-regrowth even when mixed with a drink when combined with other proteins and ingredients that are included in this supplement.

The founder of this formula first tried this ingredient more than 20 years himself and has since experienced optimal enhanced energy compared to before he started taking it. It has since been backed by scientific research showing that Cordyceps Mushroom are indeed effective at boosting mental energy and has also been linked to an increase in sex drive.

The use of this mushroom is known to improem emotional and mental health problems that are brought about by high stress. Earning the unofficial title of the King Of Mushrooms, Reishi has been used in the Eastern Hemisphere for thousands of years to increase longevity and improve vitality.

Derived from bovine and marine collagen, the collagen used in this formula are known to provide skin health support, arthritis relief and the prevention of bone loss.

Chaga Mushroom is the last mushroom extract of this formula and is used for a myriad of health benefits. These include providing the body with anti-viral and anti-bacteria benefits, support cognitive function, reduce inflammation, reduce memory loss and improve white blood cells. 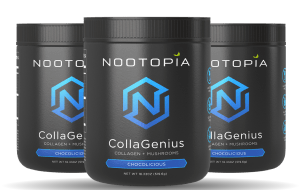 The success of Nootopia CollaGenius has given rise to many frauds who try to sell their own fake supplements in its name. This is a big issue as many customers have lost their money in joining from such fake sites. It is advised that customers should be really careful when they are joining and should do some research before they join from any website. To spot these, watch out and avoid sites that claim to write about Nootopia CollaGenius, yet the write-up is completely garbage and unreadable as they are created by software and spammed all over the internet. It is always better to avoid joining from any other site other than the official one. Therefore, it is highly advised that consumers do careful research, or only join from the site from the official website here – http://Nootopia.com/CollaGeniusOfficial (link opens in a new window). The official website that they have includes the legitimate supplement.

Nootopia CollaGenius Preview: (to pause video, simply tap/click on it)