Synergy Spanish Preview: (to pause video, simply tap/click on it)

Are you looking for more information about the Synergy Spanish course and is this really the best way to learn Spanish as its founders claim it to be? This is a course that adopts a more unique way of teaching Spanish to members that has been found to be more effective and allows students to learn much more quickly. We have found their learning processes to be highly engaging, interesting and interactive, making it much easier to absorb the Spanish speaking lessons that we were being taught.

The key to success with this program is to memorise the most used 138 words in Spanish. This is because 50% of its communication is made of these words, and knowing how to use them in different situations pretty much covers all the most important vocabulary of the Spanish language. This is a way of learning the language that we have found to be much faster and more effective than most other methods of learning the Spanish language.

Review Verdict: Synergy Spanish is a legitimate program that works

How Do You Learn Spanish With The Synergy Spanish Course?

As highlighted earlier, once you have a grasp of these 138 most commonly used words, you will then learn how to put together some entry level Spanish sentences by recognising the patterns that these phrases are commonly put together in. This is a fast-track method of learning Spanish that shortcuts every other Spanish teaching method out there on the internet today.

This method of learning adopts the Pareto principle known as the 80/20 rule, meaning that 80% of your results typically comes from 20% of your efforts. By only focusing on 20% of the most commonly used phrases and words, you will shortcut your way to success in learning Spanish. The training materials include 68 structured audio lessons that last about 15 minutes each, along with a guidebook that shows you how to learn from these audios effectively to construct roughly 88,000+ Spanish phrases and sentences.

Will Synergy Spanish Course Work For You?

Given that this course is taught in a wide variety of multimedia formats, it has achieved one of the highest success rates amongst all Spanish learning courses on the internet, simply because it caters to all types of learners from visual to audio. This is done via the Synergy Spanish audio and visual guides created for learners of all types and levels. Another huge advantage regarding the audio training is that it is possible to listen to the audios and learn Spanish on the move with Synergy Spanish, making it a great option for busy people to listen to and learn while they are on-the-go. 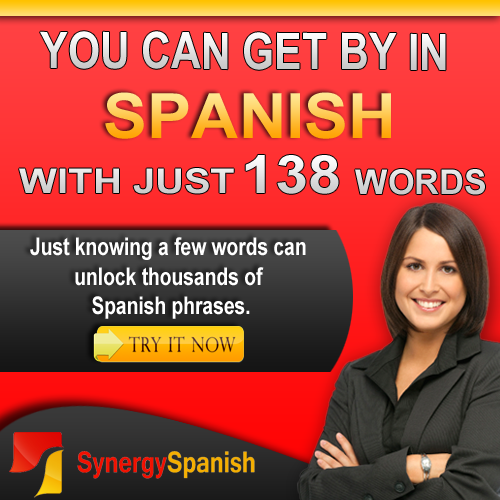 Review Verdict: Synergy Spanish is a legitimate course that works

The success of Synergy Spanish has given rise to many frauds who try to sell their own fake programs in its name. This is a big issue as many consumers have lost their money in buying from such fake sites. It is advised that consumers should be really careful when they are subscribing and should do some research before they buy from any website. To spot these, watch out and avoid sites that claim to write about Synergy Spanish, yet the writeup is completely garbage as they are created by software and spammed all over the internet. It is always better to avoid buying from any other site other than the official one. Therefore, it is highly advised that consumers do careful research, or only buy join the site from the official website here – http://SynergySpanish.com/Official (link opens in a new window). The official website that they have includes the legitimate program.

In summary, this is truly a high-quality Spanish learning course that works a wide variety of learning-type people. To see if it is right for you without making a commitment yet, you can always check out the free demos on its website to determine if its style of teaching suits you before you join. Therefore, if you too would like to learn Spanish in the fastest way possible by fully grasping these 138 words to start speaking Spanish easily and quickly, then we highly recommend you to learn more about Synergy Spanish at the button link below!