Are you looking for more information about Zen Arbitrage Marketplace and you want to know more about whether or not this tool can really deliver on its promises?  This tool finds low-cost books for its users with low (or no) FBA competition. They can then relist at higher fulfilment by Amazon price and earn from the profits.

1) Use the software to find low-priced items from other sellers.
2) Identify the ones with a high FBA price. (Or those with no competition at all.)
3) Buy them at the low price and then resell at a higher FBA price. 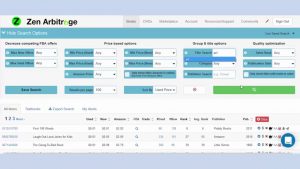 Zen Arbitrage Marketplace vs Eflip – Which One Is Right For You?

Zen Arbitrage Marketplace is not a service that provides a “list” of items to resell. They are a fully searchable database of arbitrage opportunity. Members can be part of this small rock star group of Amazon sellers who have access to this software and be able to source books (& more) in their pyjamas.

It’s a problem that afflicts most Amazon sellers ,whereby there are too many sellers fighting over the same inventory, at the same few sources. But the best source could be right under your nose that is called Amazon. And it contains a nearly endless supply of books & DVDs that anyone can resell for a profit. And by resell, the team from Zen Arbitrage Marketplace mean mean right back on Amazon.

What would your business look like if you did not have to leave the house? Do you want to have to keep driving around, hauling inventory from place to place? Or become a media sourcing magician– making profitable inventory appear outside your doorstep? There has never been a software tool to “mine for gold” on Amazon.

How Can Zen Arbitrage Marketplace Benefit You?

Using it is like getting crazy X-ray goggles to find veins of gold hiding deep inside Amazon. Something only known of by a few people… until now. There is an emerging movement of elite sellers buying items from one site, and reselling on  another. What few have figured out is you can purchase on one site and resell on the same site, and there’s no bigger & better site than Amazon.

How Much Does Zen Arbitrage Cost?

The cost of get a Zen Arbitrage subscription is $97, without any hidden fees or contracts and is cancellable at any time. This fee will include access to all of its features and services. For sending the books you have purchased to Amazon, you will have to then factor in the additional costs of doing so before you can add them to your inventory. This typically is around $17 for a box of 25 books, and bulk shipping is cheaper than mailing individual books.

The success of Zen Arbitrage Marketplace has given rise to many frauds who try to sell their own fake programs in its name. This is a big issue as many customers have lost their money in buying from such fake sites. It is advised that customers should be really careful when they are purchasing and should do some research before they buy from any website. To spot these, watch out and avoid sites that claim to write about Zen Arbitrage Marketplace, yet the write-up is completely garbage and unreadable as they are created by software and spammed all over the internet. It is always better to avoid buying from any other site other than the official one. Therefore, it is highly advised that consumers do careful research, or only buy from the site from the official website here – http://ZenArbitrage.co/MarketplaceOfficial (link opens in a new window). The official website that they have includes the legitimate program.

ZenArbitrage makes easy book arbitraging possible with the software.  Sourcing the books on  Amazon without the Zen Arbitrage Marketplace software would be extremely time consuming, tedious, laborious and not my idea of the perfect home business.

ZenArbitrage offers a five day free trial (the monthly charge is $79.99).  There is a built in profit calculator within the Zen Arbitrage Marketplace software that takes into consideration all Amazon fees.  You will hence know your profit before you purchase the book, further lowering your risks. If this tool is something you are interested in, you can find out more about Zen Arbitrage Marketplace at the button link below!